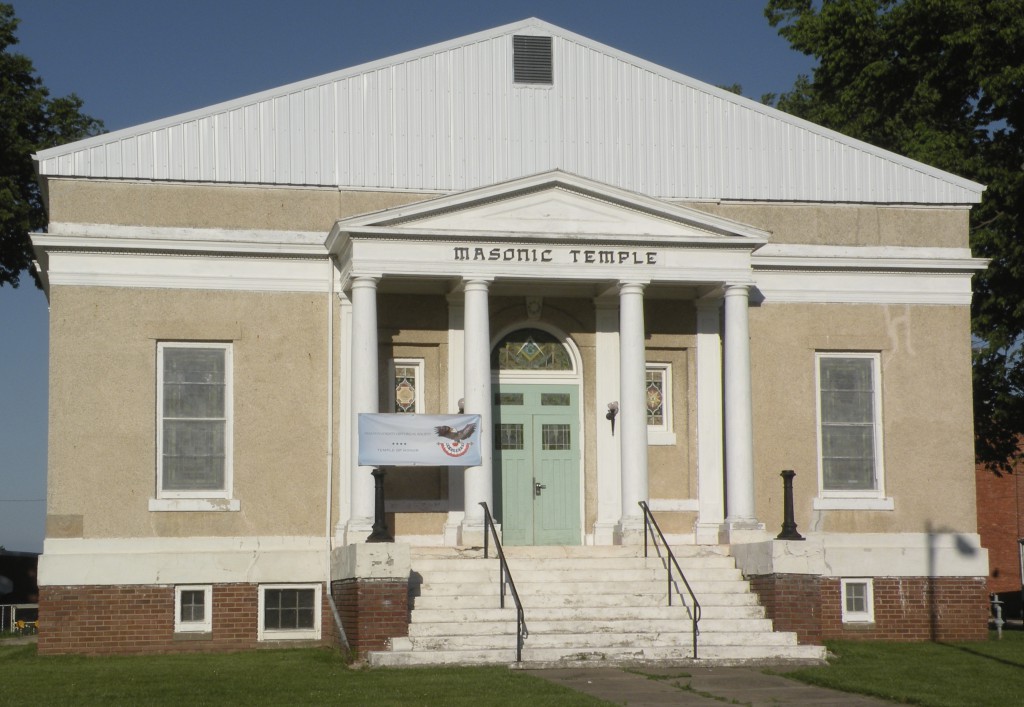 Stairs to the hidden level

Gifted to the Nemaha County Historical Society in 2011, the Seneca Masonic Temple was renamed “Temple of Honor” . The historical artifacts from all branches of the military – uniforms, photographs, medals, hats, helmets, and flags – represent those who served their country over the last 150 years.  A library of books, maps, letters, and papers are available for researchers.

The Temple is a detached Classical Revival style institutional building facing Sixth Street to the west. The building has a rectangular form, 50 feet x 80 feet, with side bays projecting north and south. This is a one story stucco building on a raised brick tile basement with two more hidden smaller levels above the main floor. 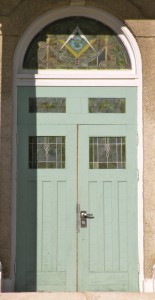 The entrance has concrete steps with flanking brick piers. These lead up to the paired ornamental wooden entrance doors with leaded glass glazed panels. The pediment entrance portico on four columns features the name MASONIC TEMPLE set in metal letters in the frieze.

The north and south facades have a central recessed panel with paired flat columns flanking small windows. The basement has small hatch windows.

Generally, the building has good architectural integrity except for the modern corrugated metal gable roof that was added on top of the original flat roof. The original roof was sealed with half lap asphalt. The newer metal shed roof prevents problems of standing water, periodic leaks, and is almost maintenance free. The walls are hollow red clay tile made by the Seneca Shale Brick Works Co.

The Seneca Masonic Temple, Seneca, Kansas, was constructed in 1917 and dedicated January 1, 1918. The massive stained leaded glass windows high up in the temple walls are covered with plexus-glass to protect from hail damage, but retain their elegant hues. The outside entrances to the basement on the north and south of the Temple have been covered for security and to prevent snow and moisture build up; an inside stairway leads to the basement from the main level and from the main floor to a second smaller level and up to an even smaller third level where the original Masonic uniform lockers are located. The second and third levels are storage decks and are not public areas. 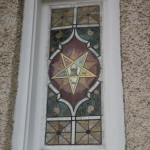 The builder of the Masonic Temple was George A.Ahaul of Shaul & Assenmacher who had a staunch and respected reputation in Kansas and Nebraska. He is believed to be one of the most extensive contractors in Seneca’s history. He is credited with building the Masonic Temple, City Hall, the Ely hardware building and Dr.Thomson’s office building in Seneca. He was also instrumental in the organization and management of the Seneca Shale Brick Company which was turning out 20,000 bricks per day in 1916. Mr.Shaul provided labor for a large number of Seneca workmen and was a committed defender of the area. 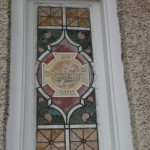 Gifted to the Nemaha County Historical Society in 2011, the Seneca Masonic Temple was renamed “Temple of Honor” and now houses the Nemaha County Military exhibition. The historical artifacts – uniforms, photographs, medals, hats, helmets, and flags – represent those who served their country over the last 150 years. All branches of the military are represented. A library of books, maps, letters, and papers are available for researchers.

The Temple of Honor is open by appointment.

Displayed on the front lawn: