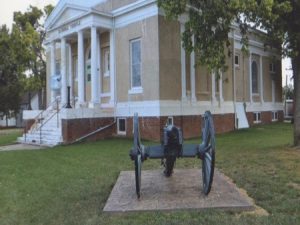 The wrought iron 3 inch Ordnance Rifle cannon was invented by John Griffen in 1854 as an answer to the danger of cast iron gun tubes exploding when fired.

The 1864 Ordnance rifle that is on display was presented to Earl W. Taylor American Legion Post 21 but remains the property of the United States Government.

Your donation will make history.