How do you move a Howitzer?

A howitzer is a type of artillery piece characterized by a relatively short barrel and the use of comparatively small propellant charges to propel projectiles at relatively high trajectories, with a steep angle of descent.

This one is an armored self-propelled 105 Howitzer M7 Priest. It had a crew of seven and most likely served in WWII and Korea. GI’s commonly referred to this weapon as a Priest due to the pulpit-like shape of the machine gun ring.

The Earl W. Taylor American Legion Post 21 holds a “deed of donation” by the United States for the Priest which calls out a duty to display and maintain for educational purposes. The Legion and Historical Society have signed a joint agreement for the purpose of displaying the Howitzer on the lawn of the Temple of Honor museum grounds.

How do you move one that is not operational and weighs approximately 25 tons? With a very skilled truck driver, heavy equipment, a heavy chain, and of course volunteers. 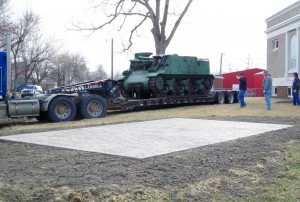 Decide where to park it 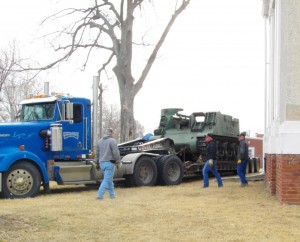 Back it into position 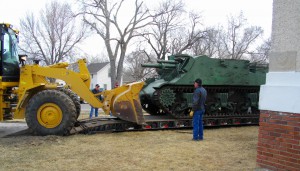 Start it rolling off of the trailer

Use the tractor to stop it from rolling into the street 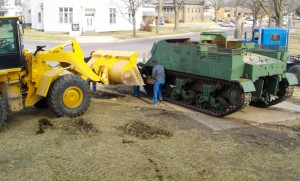 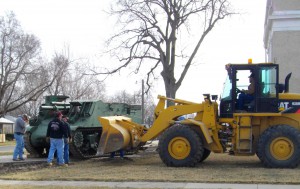 And make a final adjustment 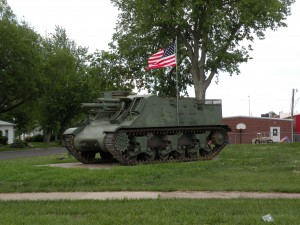 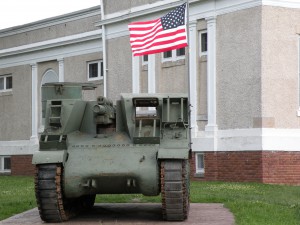 Meet a Howitzer face to face.