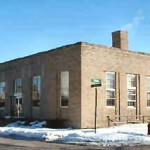 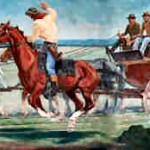 The Tortoise and the Hare

The mural “The Hare and the Tortoise” is an oil on canvas mural that depicts a Pony Express rider galloping past an Overland Stagecoach on the pony express route that crossed northeastern Kansas between 1860 and 1861. The coach and rider have just rounded a rock outcropping as they continue along the rutted trail. The rider waves to the stagecoach as he speeds past them. The guard waves back and smiles. the mid-spring, northeastern Kansas countryside is marked by low shrubs and some trees. Bluish hills mark the horizon.

The artist was Albert T. Reid (1873-1955), a Concordia, kansas native whose father operated a stagecoach line from Concordia to Marysville. He was paid $570 for the mural that he painted at his Long Beach, New York studio in 1937. He also painted the Section murals for the Olathe, Kansas and Sulpher, Oklahoma post offices.