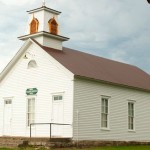 From the National Register of Historic Places Application – 2004

United States Department of the Interior

Constructed in 1883, the Prairie Grove School sits on an acre of uncultivated farmland, located 10 miles north of Seneca and a mile south of Nebraska on Highway 63. The frame schoolhouse stands in a rural area, NE 1/4 of Section 7,  Nemaha Township 1 South, Range 12 East. Bounded on the east by gravel road “H”, the Prairie Grove schoolhouse has fields on the south and west, and the homestead of the landowner on the north. A storm cellar with double doors remains on the northwest corner of the acre. The building maintains an easter orientation on a ridge overlooking the valley formed by nearby Nemaha River and Turkey Creek off Road 232, which runs east and west.

The one-story, vernacular clapboard building has a double entrance of two six-foot entry doors topped with matching horizontal transom windows, which flank a centrally placed double hung window. Limestone rock from the nearby quarry on Burger Creek serves as the foundation, path, front steps for the open front porch, which is made of concrete. The short wood-frame bell tower is capped with a mansard-roof belfry that is crowned by an ornate flagpole with weathervane. Diamond-shaped shingles cover the belfry, which has pointed arched louvered vents on four sides and houses the original, functioning bell. The gable roof was covered with corrugated sheet metal at an unknown date.

The Prairie Grove School served Nemaha County School District Number 65 from the fall of 1886 until 1963, when unification forced its closing. The building was sold at auction for $220 to Och Worrick, who donated the building to an alumni association of 13 former students, called Old Settlers. They maintained the building and held yearly reunions until 2001 when only three members of the group remained.

Although published architectural plans for school buildings were available for schools as early as 1832, homesteaders used the resources at hand to erect a school with little inclination to follow elaborate school designs. Most one-room schoolhouses had an obvious church influence to the construction. The Prairie Grove Schoolhouse exemplifies the prototypical, one-room country schoolhouse in its form and design.

The school district was organized in 1872 and was the sixty-fifth school district to be organized in Nemaha County, thus it was numbered 65. In the fall of 1874, after a difficult summer of a grasshopper invasion into the farmlands, the school patrons of the newly formed district decided to have a school for their children. Lizzie Taylor, aged 17, was hired to teach for 5 months. She was paid $25 per month, $12 of which she paid to Mrs. Will Allison for her board and room. The first classes were held in the home of Mr.and Mrs. William Robbing, but later in the year they moved to the home of Mr.and Mrs. Emil Schultz.

In 1875, a small frame school building was completed. The name “Prairie Grove” was chosen because the   building was nestled in a grove of trees surrounded by vast prairie  for miles around. Mattie Berger was the first teacher and was paid $25 per month.

By 1885, the boundaries for District 65 had been extended, bringing more students to the schoolhouse. More room was needed in a building that could be heated. In a special election held on July 6, 1885, the school district patrons approved bonded indebtedness for building a bigger schoolhouse. The contractor was Charles Stewart of Seneca. Landowner, Gus Allison,  donated the land to the district.

The schoolhouse enlarged the existing frame building, adding a stage, cloakrooms, and a chimney for a coal stove. The school was insured for $3,000 and the contents for $500. The name, Prairie Grove, was continued but it was better known to the community as the “Allison School”.  Estelle Stewart was hired to teach for $35 per month.

The school was closed in 1963. It was the last one teacher school with continuous service to be disorganized in Nemaha County. Mrs. David Rinne was the last teacher, earning $420 per month.