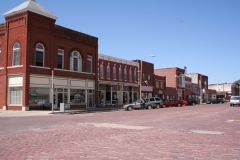 Many business in the Main Street district had moved from wood frame buildings into more substantial brick ones by 1890. Several storefronts on Main Street have cast iron thresholds and fronts that were manufactured by the Butler Foundry in Seneca. 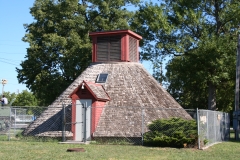 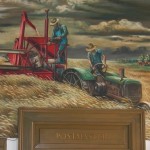 Federal financial aid contributed to the construction of the new post office in 1938. Between 1934 and 1943, the U.S. Treasury Department’s Section of Fine Arts commissioned over 1600 pieces of public art for newly constructed post office buildings across the United States. In the New Deal arts program, artists were directed to create works in the “American Scene” style, with emphasis on the local history, culture, and economy of the communities in which the art was placed. This is one of 24 post offices listed as part of a Kansas Post Office Art Work Thematic Resources nomination (1936-1942) for its mural “Men and Wheat.”

Universalist Church (now the Seneca Free Library) (1867)
This building is one of the earliest surviving buildings in Seneca and on Main Street. Built in 1869 of Kansas soft gray stone with stained glass windows and bell tower it has mixed features of both the Gothic Revival and Italianate architectural styles. Although religious congregations met in the 1850s, Seneca had no church buildings before construction of the Universalist Church. The building was used by the Methodists, Baptists, and Congregationalists in common until other churches were built. (Catholics organized St.Peter and Paul Church in 1869.) The city of Seneca purchased the building in 1928 and the library moved from rooms in City Hall. The library building was rehabilitated and a new wing was added in 1997. 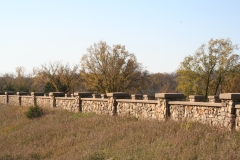 The Civilian Conservation Corps (CCC) constructed Lake Nemaha during the 1930s. Highway 63 crosses atop the lake’s dam, which features 200 distinctive quarried stone posts or pillars on either side of the road. The freestanding posts along the west side are situated seven feet apart, while those on the east side are set within a stone wall and sit 17 feet apart. The guardrail posts are nominated for their association with the CCC and their distinct reflection of rustic park architecture common to New Deal-era parks.

From “History of Nemaha County, Kansas” by Ralph Tennal: