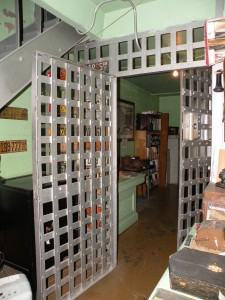 Built in 1879, this building housed the jailer and his family and in the rear wing, patented steel cells for prisoners. 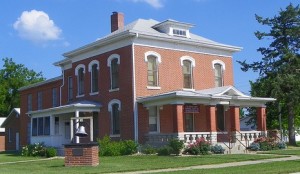 The original one story jail and sheriff’s residence was completed in 1879.

The citizens of Nemaha County were generally hard working and law-abiding; occasional drunkenness, fist fights and family spats were the typical fare for the Sheriff. The sheriff lived in the house and was the jail keeper. His wife cooked and did laundry for the prisoners. Two rooms above the jailer’s residence were used for female prisoners and those who had committed minor offenses.

The jail operated with only a small maintenance budget. By 1905, general deterioration had weakened the floor and roof resulting in several escapes. The brick wall in one area was so weakened one prisoner simply pushed out a section and left.

A renovation in 1907 added a tower and enlarged the jail. The second floor addition featured P.J. Pauley patent steel cells with a Patent Lever lock for maximum security. The residence was remodeled with the addition of a front porch, office, and kitchen with pass-through to the jail cells. The entire building was rebricked with bricks from the Seneca Brick Factory. In 1955 the tower was removed because the added weight was causing cracks in the brick exterior.

In 1977, the jail was moved to another location to meet new state requirements for jail facilities. The Nemaha County Historical Society, Inc. purchased the building in 1978. The residence and jail were added to the Kansas and National Registers of Historic Places in 2004.

You are welcome to come in and rest a while in an original jail cell.

Click on this link to read about one of the prisoners – Mrs. Myrtle Lattimer – that kept her dead mother’s body for 2.5 years before she was found out. 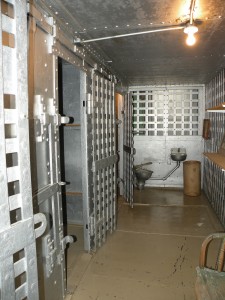 One toilet and sink for 3 prisoners 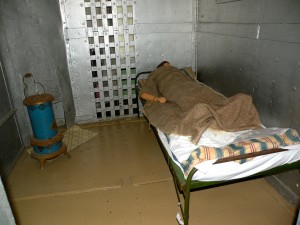 This bunk is already taken